By the way, in the midst of the sadness and tragedy in the Eaton article on L’Wren Scott I posted the other day, did anyone notice something a little…creepy? Not as in morbid-creepy or tasteless-creepy, but creepy as in something we astute pop culturists on the Interwebs might have heard of before? Describing Scott’s relationship with Mick Jagger, Eaton writes:

Nobody has a cooler life and friends than Mick Jagger, who had plenty of time to trot the globe as the Stones really weren’t touring much. In the Loire Valley, [Scott] and Jagger, a history buff, would roll up strangers’ driveways, browsing stately homes.

Anybody catch that? Mick Jagger as a “history buff”? Spending his time looking at “stately homes”? Any fans of The Simpsons out there do a double-take when they read this?

Have a look at this run of dialogue from “Lisa’s Wedding,” which first appeared in 1996:

Hugh Parkfield (Mandy Patinkin): I can’t believe how much we have in common. We’re both studying the environment, we’re both utterly humorless about our vegetarianism, and we both love the Rolling Stones.
Lisa: Yes. Not for their music, but for their tireless efforts to preserve historic buildings.

Holy God, Simpsons writers! What sort of magic Portal of Futuristic Accuracy did you have in your clubhouse back in the 1990s???

Okay, maybe it wasn’t so accurate. Note the poster behind Lisa’s fiance, Hugh.

The casket appeared to be weeping roses, as if sweet Ophelia herself were inside.

Whenever a woman dies of suicide, someone inevitably rolls out poor, soggy Ophelia. Never mind that the surviving characters in Hamlet make it a point to argue about whether she killed herself or simply sank to her death under the weight of her own derangement. Never mind that there are plenty of other women suicides in Shakespeare. Juliet. Goneril. Cleopatra. Brutus’s Portia. Lady Macbeth (although you could make a case that her madness seals her fate, the same way that Ophelia might not have been aware that if she floated in the brook and did nothing, her clothes would drag her under).

Maybe the clothes made Phoebe Eaton think of Ophelia when Eaton wrote this article on L’Wren Scott, former model, fashion designer, and partner to Mick Jagger. Scott hanged herself from the knob on her balcony door on March 17, 2014. I mention this detail because Eaton mentions a “Juliet balcony” that decorated the living room of a different Scott residence, one that Jagger nicknamed the “Barbie house.” Interesting that to Jagger, the trappings of a Juliet were associated with dolls and girlie things, while to Scott all of her belongings conveyed special meanings. (Phillip Bloch, one of Scott’s colleages, said of her “Barbie” cottage and its contents, “‘Everything had been somebody’s something-something. Everything had a provenance, a story.'”)

More to the point, though, isn’t there something odd about associating grown women, however troubled, with these teenage Shakespearean heroines? According to Shakespeare’s own words, Juliet is only supposed to be 13. Ophelia’s age isn’t mentioned directly, but most Shakespeare discussion on the Internet (which you just know has to be reliable, since so many college freshmen are copying essays from it) agrees that she’s around 15 or 16. L’Wren Scott was almost 50 when she died. Also, she clearly meant to die–her autopsy confirmed that. And even though she may have had a mental illness, she was not so far gone that people around her noticed her suffering. So why exactly is Eaton so quick to compare Scott to Shakespeare’s frail, manipulated maiden who crumples under the pressure of having to live life without her father’s iron-clad authority? Eaton herself describes how Scott grew up in small-town Utah, how she didn’t go to college, how she went from working retail jobs to modeling to fashion designing and jet-setting around the world with her rock-star-legend long-term boyfriend. Are we as a society so bereft of metaphors for women’s lives that, when faced with one so powerful, whose death was so tragic, we have to grab yet again for flimsy Ophelia? After 400+ years, is that what women of all ages boil down to–youth and dresses and pretty flowers? 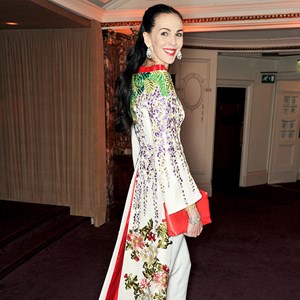