So two years ago, there was a concert called GeorgeFest in Hollywood. Well crap, why didn’t anyone tell me???

I just discovered the live album of the concert, which is amazing and surprising. (Conan O’Brien singing “Old Brown Shoe has to be one of the most surreal yet thoroughly fun musical post-Beatle experiences out there.) And there’s this breathtaking cover of Norah Jones singing “Something.” I’m speechless. And, of course, my initial reaction was, “Wow! How great is it that they managed to dig up Norah Jones to do this concert! Haven’t heard from her in a while.” Then, in the next millisecond of brain function, “Oh right. She’s Ravi Shankar’s daughter.”

Had to share this wonderful and absolutely accurate tweet, created by Jennie Goloboy and riffed on by Lars Doucet. Writers, take note:

I just had to add an illustration to this glorious tweet. Editor responds to Beatle's Query. https://t.co/m5UNFotNyV pic.twitter.com/fBk0OxPY6q

Of course, for the sake of editorial nitpickery and Beatle fanatacism, I have to say that the author of this query letter ought to be J.P. McCartney. But in my own mind, I fan-wank this oversight by noting that, as the letter’s author seems terribly insecure, it’s possible that he signed his literary friend’s name to try to increase his chances of getting his query looked at. (John did write a couple of books, after all.)

By the way, in the midst of the sadness and tragedy in the Eaton article on L’Wren Scott I posted the other day, did anyone notice something a little…creepy? Not as in morbid-creepy or tasteless-creepy, but creepy as in something we astute pop culturists on the Interwebs might have heard of before? Describing Scott’s relationship with Mick Jagger, Eaton writes:

Nobody has a cooler life and friends than Mick Jagger, who had plenty of time to trot the globe as the Stones really weren’t touring much. In the Loire Valley, [Scott] and Jagger, a history buff, would roll up strangers’ driveways, browsing stately homes.

Anybody catch that? Mick Jagger as a “history buff”? Spending his time looking at “stately homes”? Any fans of The Simpsons out there do a double-take when they read this?

Have a look at this run of dialogue from “Lisa’s Wedding,” which first appeared in 1996:

Hugh Parkfield (Mandy Patinkin): I can’t believe how much we have in common. We’re both studying the environment, we’re both utterly humorless about our vegetarianism, and we both love the Rolling Stones.
Lisa: Yes. Not for their music, but for their tireless efforts to preserve historic buildings.

Holy God, Simpsons writers! What sort of magic Portal of Futuristic Accuracy did you have in your clubhouse back in the 1990s???

Okay, maybe it wasn’t so accurate. Note the poster behind Lisa’s fiance, Hugh.

If you haven’t started following @oldpicsarchive on Twitter, you should. It’s like a little time machine taking you on surprise visits back when the cultural zeitgeist didn’t include Kardashians.

There! Didn’t that do your spirit good?

(In case you didn’t know: the dog featured here with Paul McCartney is his old English sheepdog, Martha, for whom he wrote “Martha My Dear.” If you don’t know who Paul McCartney is, I’m afraid I must weep for your soul.)

Hey, Fickle Readers! Those of you who may have caught my recent post on Wonder Woman, take note: the Doubleclicks, who wrote the amazing song “Wonder,” are going on tour and coming to a venue near you! Here’s their official tour schedule: 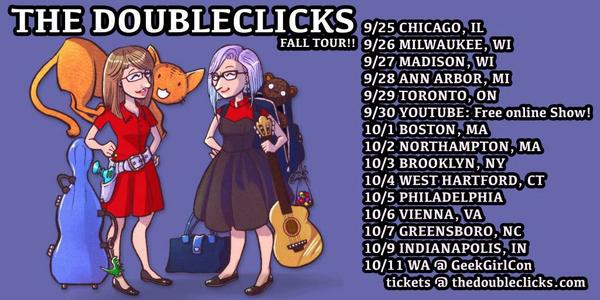 Tour Schedule for the Doubleclicks. Yes, that is a cello case Cartoon Aubrey has beside her!

And for anyone who needs any more proof of this duo’s awesomeness, here’s a sampling of songs from their YouTubeChannel:

“Thank God It’s Over!” (About graduating from college/grad school/what have you. To which professional academics say: hah! It’s never over!! Yaaaaaaargh!!!!!! [Followed by maniacal giggling])

Their cover of “Free Bird,” which is a work of art. Listen for accompaniment on the Meow Keys!

And, ooh, ooh! This amazing cello cover of the Doctor Who theme. Cellos are cool!

You know, there’s a lot of good writing out there. So much, in fact, that often as a reader I feel inundated. Long ago I’ve given up catching up in the writing world (okay, I have a twinge of jealousy every now and again, but then my body craps out on me and I sleep for three days). But reading, hey–I can do that with hardly any effort, right?

Hah! says the Internet. Hahahahahahaha–I think I just peed my Virtual Pants a little bit. And we’re not even talking about the laff riot that printed books, ebooks, and Amazon are having, individually and as a loosely affiliated media conglomerate.

Okay, so reading all the good stuff out there is Nigh Unto Impossible, probably even more Nigh than keeping up with the accomplishments of writers that clamber like ants all over the face of the world. Every once in a while, though, you do get to read a piece that is mind-blowing (in a humbling sense, not in the typical Internet content-mill sense of “40 Ways Toasting Bread Will Blow Your Mind). These are works that not only open eyes but crack open the universe. And, I’m pleased to report, that today’s stunning piece of writing takes as its subject that most dreadfully neglected of superheroes, Wonder Woman.

Now, I gotta admit, I myself have been a tad irked by Wonder Woman in the past. I grew up in the 1970s watching Lynda Carter play Wonder Woman on TV, and I loved her, loved Diana, loved dressing up in my Wonder Woman Underoos with a piece of sparkly rope and a Burger King cardstock crown that my mom cut up to resemble Wonder Woman’s tiara. (Yes, I have pictures of me in my Wonder Woman “costume.” No, you can’t see them.) I loved Wonder Woman with the innocent narcissism of a little middle-class white girl who looked at Carter and thought, “Yes! The only girl superhero on TV isn’t a blonde! Brown hair rules!!!” And yet later, when I started understanding a little more about the way women are portrayed in the media, and I took a closer look at Wonder Woman’s magic jewelry, skimpy outfit, truth lasso (the hell??), and crummy villains made for a “girl” to fight (yeah, that Egg Fu, what man apart from all of them could crack him open), I became, shall we say, disenchanted with the crime fighter from Paradise Island. She became an embarrassment, yet another vision of the perfect woman created by men, a cause of that queasy feeling you only get in the presence of something once adored by a younger, half-rejected version of yourself.

I will also admit that recently I’ve been coming to terms with my feelings for Wonder Woman. A terrific geek-girl band (yes, world, geek girls DO exist!!!) called the Doubleclicks came out with a tribute song called “Wonder” that always brings a tear to my eye, so perfectly does the song capture the superhero sentimentality that Five for Fighting and Crash Test Dummies, among others, gave to Superman.

And now, we have Jill Lepore’s article “The Last Amazon”.

Man, does this piece of reporting deliver.

Not only does Lepore examine Wonder Woman’s unusual beginnings in the mind of a polyamorous, women’s-rights-espousing male psychologist in the 1940s, not only does Lepore follow the line of inspiration back to famous first-wave feminists like Margaret Sanger, Lepore manages to work in little nuggets of pure-gold irony like this:

Last December, Warner Bros. announced that Wonder Woman would have a role in an upcoming Superman-and-Batman film, and that, in a three-movie deal, Gal Gadot, a lithe Israeli model, had signed on to play the part. There followed a flurry of comments about her anatomical insufficiency for the role.

“It’s been said that you’re too skinny,” an interviewer told Gadot on Israeli television. “Wonder Woman is large-breasted.”

“Wonder Woman is Amazonian,” Gadot said, smiling coyly. “And historically accurate Amazonian women actually had only one breast.” (They cut off the other one, the better to wield a bow.)

The modern woman, Crystal Eastman explained in The Nation, “wants some means of self-expression, perhaps, some way of satisfying her personal ambitions. But she wants a husband, home and children, too. How to reconcile these two desires in real life, that is the question.” You can find more or less the very same article in almost any magazine today—think of Anne-Marie Slaughter’s 2012 essay, “Why Women Still Can’t Have It All”—which is a measure of just how poorly this question has been addressed. A century ago, though, it was new. Between 1910 and 1920, Virginia MacMakin Collier reported in 1926, in “Marriage and Careers,” the percentage of married women working had nearly doubled, and the number of married women in the professions had risen by forty per cent. “The question, therefore, is no longer, should women combine marriage with careers, but how?”

Here’s how. Marston [Wonder Woman’s creator] would have two wives. Holloway could have her career. Byrne would raise the children. No one else need ever know.

In the spring of 1942, Gaines [publisher of Wonder Woman] included a one-page questionnaire in All-Star Comics. “Should WONDER WOMAN be allowed, even though a woman, to become a member of the Justice Society?” Of the first eighteen hundred and one questionnaires returned, twelve hundred and sixty-five boys and three hundred and thirty-three girls said yes; a hundred and ninety-seven boys, and just six girls, said no. Wonder Woman joined the Justice Society. She was the only woman. Gardner Fox, who wrote the Justice Society stories, made her the society’s secretary. In the summer of 1942, when all the male superheroes head off to war, Wonder Woman stays behind to answer the mail. “Good luck boys,” she calls out to them. “I wish I could be going with you!” Marston was furious.

Marston died in 1947. “Hire me,” Holloway [Marston’s official wife] wrote to DC Comics. Instead, DC hired Robert Kanigher, and Wonder Woman followed the hundreds of thousands of American women workers who, when peace came, were told that their labor threatened the stability of the nation. Kanigher made Wonder Woman a babysitter, a fashion model, and a movie star. She gave advice to the lovelorn, as the author of a lonely-hearts newspaper advice column. Her new writer also abandoned a regular feature, “The Wonder Women of History”—a four-page centerfold in every issue, containing a biography of a woman of achievement. He replaced it with a series about weddings, called “Marriage à la Mode.”

“The Last Amazon” is a long article, but an important one. Read it before the Subscription techies at the New Yorker stuff it behind a firewall. Afterward, feel free to get all nostalgic for the gains in women’s lives that were dreamed of but never happened, or that happened but didn’t stick. Then listen to the Doubleclicks and remember to hang on to a little of that queasy, kid-like hope, that awe for the marvelous being who, every once in a while, resembles you.

Okay, this isn’t knock-me-over-with-a-wow! kind of piece, but it is fun.  One of my favorite cheesy 80s white-guy songs is “Africa.”  It’s fun to rock out to when you’re driving somewhere, especially in the rain.  (Also, somewhere in my mother’s house, I have a vinyl version of the Toto LP on which “Africa” appears.  I think I bought it when I was 9 or 10.)

Sams doesn’t manage to make sense of the lines “Gonna take some time / To do the things we never had” any more than Toto did.  But maybe you’d lose the whole song in the process of cleaning up the gibberish, terrible rhymes, and goofy, culturally tone-deaf imagery?

(Sure as Kilimanjaro rises like Olympus above the Serengeti?)