Rereading the paper afterward, I found the authors warning that doctors would sometimes have to go farther than just interpreting people’s wishes in order to serve their needs. Wants are fickle. And everyone has what philosophers call “second-order desires”–desires about our desires. We may wish, for instance, to be less impulsive, more healthy, less controlled by primitive desires like fear or hunger, more faithful to larger goals. Doctors who listen to only the momentary, first-order desires may not be serving their patients’ real wishes, after all….At some point, therefore, it becomes not only right but also necessary for a doctor to deliberate with people on their larger goals, to even challenge them to rethink ill-considered priorities and beliefs.

Hey there, Fickle Readers! I just spent a week writing a poem a night in an exercise called the Poetry Cleanse, and boy do I feel energized! That’s saying something big for me, seeing as how I’m usually lying around exhausted from everyday activities like taking showers, driving cars, picking up stuff from the drug store, etc. Now I know that–hey!–giving yourself the opportunity to write among friends, even if what you’re writing is pretty much crap, actually makes you feel better! Who’d a thunk it?

Here’s how it works:

And that’s the whole activity. I should say that this was not my idea but instead was suggested by someone else who put the group together. I just wanted to pass this along to all you Fickle Readers Who Are Also Poets out there, because I think it’s a brilliant concept. I, personally, have been experiencing workshop burnout in recent years. I took my first workshop class when I was a senior in high school, and I’ve been grinding away in the workshop setting off and on for about 25 years. Workshops are wonderful places to hone your craft, but I’ve also discovered that at a certain point you have to cut the umbilical cord and strike out on your own. And yet striking out on your own can be isolating, so the Poetry Cleanse concept is a nice best-of-both-worlds scenario. All you have to focus on is getting your work done and looking at what other people are doing.

The sitting your butt down and writing aspect can be hard, but being a silent audience to someone else’s creative process is wonderful.

Writing-wise, what was most helpful for me was catching ideas as they came and putting them into poems as soon as they appeared. So much of poetry is about small moments, small observations, small things, and yet the small is what’s most fleeting in our daily grind. I was especially grateful to be able to snag images that I never in a million years thought I’d be writing about, because in a normal day I never would have stopped to write anything down.

Thanks to my fellow poets in the Cleanse. Looking forward to digging more poetry out of my brain soon! 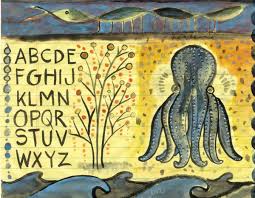 We don’t create a fantasy world to escape reality, we create it to be able to stay. I believe we have always done this, used images to stand and understand what otherwise would be intolerable.